top of page
This site was designed with the
.com
website builder. Create your website today.Start Now

It has been another fantastic year teaching, coaching, officiating, playing, and celebrating Creator's Game as well as Canada's National Summer Sport - Lacrosse!

This game continues to give back in so many ways and we are ecstatic to see new growth throughout our province!

Some community highlights from this year include:

Winnipeg Indigenous Accord - All Partners Gathering / Accord Signing Ceremony

Jordan's Principle - Great Lakes lacrosse workshops (Thanks to Isaiah Kicknosway for teaching us the traditional game!)

The Youth1st Lacrosse vision is too see sustainable lacrosse programs in all communities of Manitoba.

We are excited to announce a new partnership with Manitoba First Nations Education Resource Centre (MFNERC) this year. This week we will be visiting York Landing for the first time along with nine other communities to follow which include: Dakota Plains First Nation, Fox Lake, Pinamootang , Lake Manitoba, Keeseekoowenin, Blood Vein, and Lake St. Martin. The goal will be to create a short documentary with MFNERC throughout our Manitoba voyages.

Big thanks to all our friends, families, community members and organizations who have been so supportive over the past few years to get Youth1st Lacrosse up and running. Lacrosse is a team game and we couldn't have done it without you!

A special thanks to Mel Whitesell, Dave Courrier and Manitoba Aboriginal Sport and Recreation Council, who have been with Youth1st Lacrosse since the beginning. Your continued support to grow lacrosse in Manitoba is truly appreciated.

Looking forward to getting back on the highway and meeting some new lax brothers and sisters.

Last Chance to Register for the Winter Best of 7 Series! 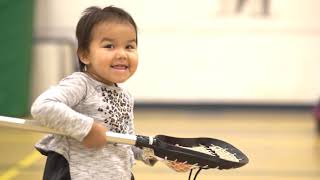